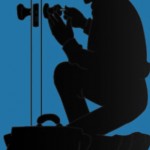 I hired Bob Locksmith after getting into big trouble with another locksmith. That other locksmith drilled the wrong hole to install a lock in my ornate, glass door. He drilled a hole for a left-handed door instead of a right-handed one, and then told me it couldn’t be fixed. He said the whole door, including side panels, had to be replaced for several thousand dollars.